Mission-X is all about giving you the option to write and share an adventure with others or for creating a random mission for the fun of it. If you want to try and write an adventure in Mission-X please download the plugin and read the tutorials in the plugin folder (missionx/docs) or download a mission compatible with v3.x, and go over it to better understand the flow.

For any question or assistance - my e-mail is: snagar.dev@gmail.com 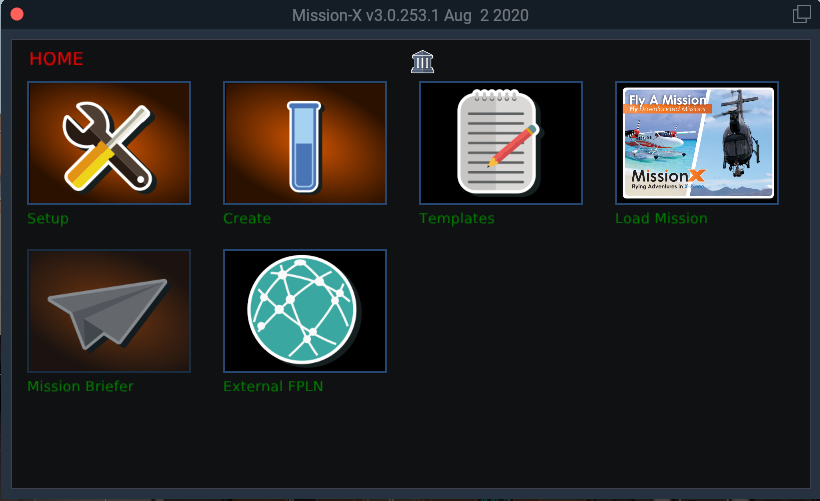 Apt.dat optimization, can assist the Random Engine to pick better locations when flying to airports.

Documentations are located in the plugins "docs" sub-folder.

Designer Guide for Mission-X v2.x plugin, can be found in the "Documentation" page.

Mission-X v2.1.29.6 x64
Latest build: 22-apr-2017
The Linux build was done in Mint18 and GCC 5.x. It can cause some compatibility issue with older OS versions. See bellow for a fix.
Installation instruction for the Linux build fix:

Latest revision of Mission-X was just added. It is consider to be stable enough to use it as the new base platform.

Please read the User Guide before installing the plugin.


Sound Libraries - Please read:
As of version v2.1.27 the sound libraries are part of the "missionx" folder for most OSes.
If you download the plugin with SOUND support, you should:
I strongly suggest to delete the old "missionx" folder, and replace with the new one.

Please notify me directly by e-mail if there are any issues with the plugin (snagar.dev@gmail.com)

[31mar2016] [bug] Fixed Step DateTime implementation.
[31mar2016] DateTime in step settings, can also have "min" attribute instead of "minutes". Support Editor, and also to be on par with GlobalSettings options.
[31mar2016] [fix]Widget Info will not stop step from continue if element does not have ALL mandatory fields. The plugin will just ignore it.
[31mar2016] better editor support for "info widget" and "date time" options.

[19mar2016] Added support to "link_to_goal_name" attribute in "feedback" to correct Mission-X Editor failing to correctly link the Feedback to the Goal. This way the plugin better guesses the link. It is also future ready to use names instead of numbers for some parts of the mission data file.

[18feb2016] Fixed bug caused by Mission-X Editor. The steps sequence might not ordered correctly and 3D Objects were effected because of it. The fix is in the plugin to be future proof.
[18feb2016] Fixed drop object hit rules.


[13feb2016] Fixed logic rules and tests when loading missions.
[13feb2016] Better evaluation of step ending, in certain scenarios.
[13feb2016] Try to better position plane elevation if "ICAO" and "location adjust" were used.
[13feb2016] Designer can pause the mission after "[take me there]" button was pressed.
[13feb2016] Plugin will allow position based on lat,long,elev and speed. This is first implementation it might not be perfect in all cases.
[13feb2016] New XML library (from Frank Vanden Berghen).
[13feb2016] Implemented latest FMOD API (based on v1.7.04). Older library should fail to work with new API.
[13feb2016] More code tuning and cleaning.
[13feb2016] X-Code6 - fixed building setup.
[13feb2016] Fixed "immediate_display" is taken into consideration when evaluating when to display “file name when reach”. It override it.

[01dec2013] Added failure to "trigger_zone" type "bound". Designer can now abort the mission if simmer leaves bound area. It will fire "onFail" event.
[16nov2013]Fixed a bug with the "draw drop object" after upgrading to the latest XP10.22 build. XP10 should not crash when drawing 3D drop object.
Fixed a bug with "reactivate_on_leave", did not work correctly.
Added "onHitFailed" event, so designer can add a message if dropped object missed target.
[04sep2013] designer can use the name "first" for the starting step, instead of "start", also made code more compatible with latest XP10 SDK.
[13aug2013] Fixed windows crash when running plugin on XP10r22.
[21nov2012] Mission-X v2.05 is out and it is built with support for XPlane 10.20 64bit. It is still needs more testings, but it loads and seem to manage missions as expected.

Please read the README.html file once you downloaded the plugin.
The plugin also has a demo mission that demonstrates some of the new plugins aspects and features.
The demo mission can be download at the following link.

Quick Installation Instructions:
The plugin download file contains two directories: WITH_SOUND and NO_SOUND. Pick the flavor you want/need, and copy it under "{X-Plane}\Resources\plugins" directory.
Please be advised, that if you install the "WITH_SOUND" support, you need to download the "fmod" library from "fmod" site or from the links below.

X-Plane 9 simmers: copy binaries from "32" directory to the main directory of the plugin.
Enjoy!

Some Other plugins to watch:

xflightplan  is a site that was built by Sagi253, it is now in its second version and it has some nice new and useful features. The site does not need a plugin anymore since it only helps with route planning and dynamic landing charts (my favorite feature).

The link to this site: http://www.xflightplan.com

This small plugin, helps you to convert Lat/Long values into x-plane format and others.
It is built into x-plane, therefore it also allows you to "paste" the values into your plane FMS, if it has any.