One of the frustrating issues I have when I fly in VR is the mapping of manipulators. They do not always behave to the natural movement of our hands (even though we use controllers).
What I would like to share on this page are modified cockpit builds that I modified myself to make it more VR friendly.
Unfortunately since I'm limited in time and resources, I can only share files for planes I own.

Currently I only modified 2 planes, my first priority is to share it with the plane designer and hopefully that would be published.
If I fail to do so, I'll just publish it here.

You still need to buy the plane (support the developers)

Remember to backup your original cockpit file, and sometimes you will have to disable the auto-updater so it won't override it.

I was able to contact SimCoders and provide them with the modded files + AC3D files I worked on.
I'm happy to say that it has been published with the plane updater.
Here is a "short rant" I wrote about this VR implementation.

The rest of the ASDG cockpits (tundra, standard)


​v1.0   - Minor modifications to the Prop/Mixture/Flaps move axes, I think it is more natural than before.
v1.1   - Minor modification for easier Autopilot support + toggle button for the vertical elevation.
The added button is not visible, you will have to hover above the vertical knob.
v1.1.1 - bigger toggle knob surface for the VVI button. You might not need the hidden button
above it (hidden button is only available in the REP version not the GENERIC one).
v1.2 - better visuals of the knobs, flipped normalized of many knobs so the green won't cover all knobs. Looks OK in
most cases (currently only for the GENERIC plane).
v1.2.1- Fixed Generic cockpit using manipulators from REP file. No vrconfig errors should be now
More button fixes for VR for Generic and REP cockpits in VR.
v1.2.2- Only for Generic build, moved the autopilot buttons a little further so you could point at them from distance
with your controllers. Not a big change, but might be preferable for some.

Please do remember to backup your original files and disable any auto update plugin if any is available.
​
Here are some modification examples:​ 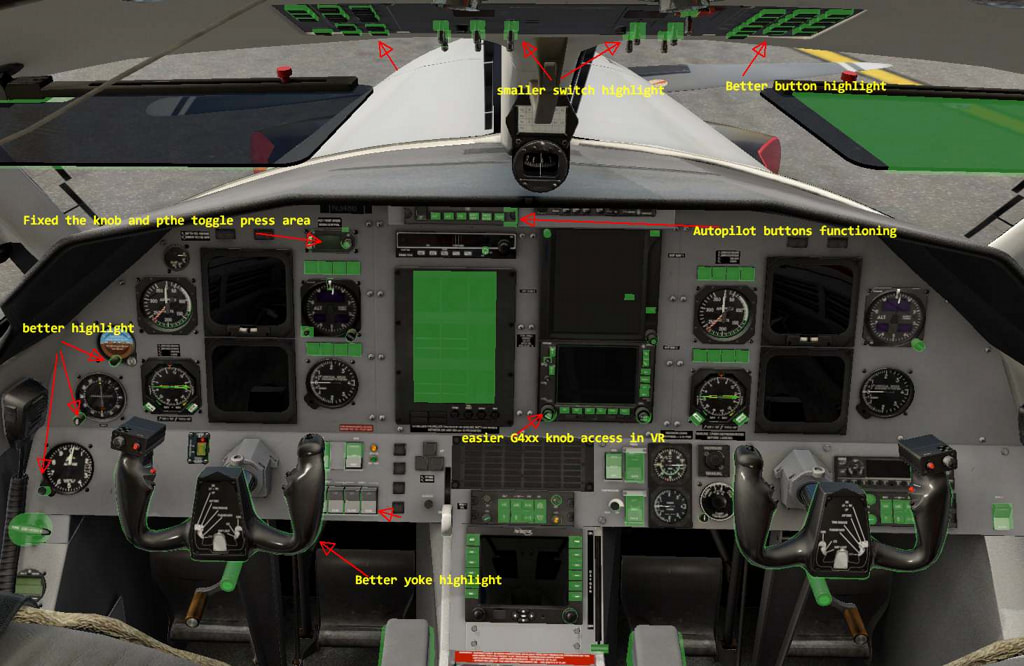 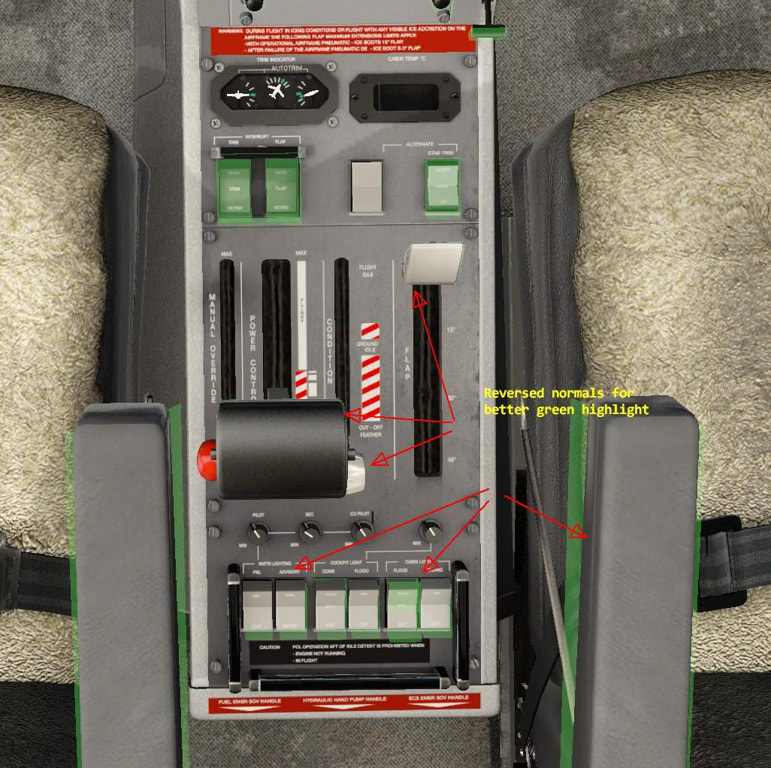 Seeing Bambinotech flying the Challenger 300, made me want to learn this plane in VR.
To my surprise the VR implementation is not that bad but it is motley based on click area and for some manipulators it does not feel right. The most annoying part is the "Flight Guidance Panel" (FGP) where you manage your autopilot commands during, well, most of your flight.
Another thing that I wanted to see is better knob highlight representation. The original way is to create a square obj for each part of the knob and thus allow you to manipulate the knob part. Another part that made AP manipulation confusing was the elevation wheel, it did not move naturally.
I left knobs that were harder to replace and worked well.

Known limitations: Plane always starts in cold and dark, and removing static elements is done only through the "ipad" in 2D mode. Once static elements were removed, you can move to VR.

I have done some modifications to the "vrconfig" file and now the knobs behaves much better.
I added few "center" actions to some of the multi knobs.

v1.2.1: Key turn in VR is now working as expected and you can start engine from VR.
v1.2.2: Regression fix. Fuel manipulator must trigger the HBM commands.I done the following: New fuel lever behavior: It can only pick left/right tanks when using the knobs, if you want to cutoff the fuel, you will have to click on one of the cutoff buttons.


​
Lighter Cockpit Color
If you want a lighter internal colors, I have replaced some interior colors to beige.
Download the beige interior png files and replace them in the "SR22/objects" folder. 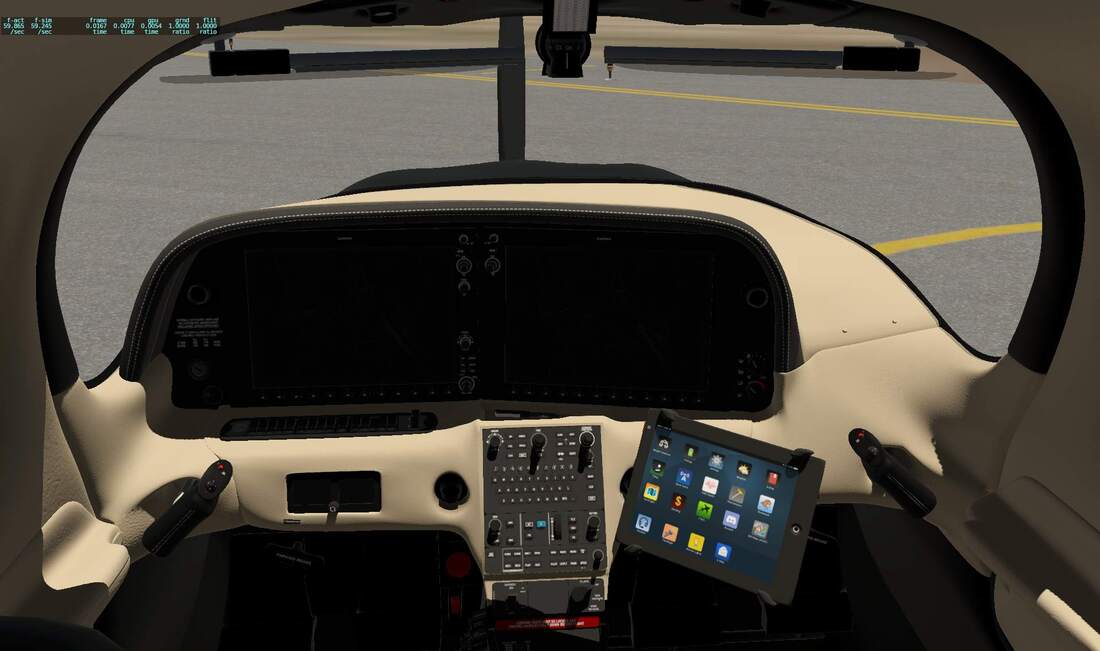 Trim Buttons Addition:
For VR flights, I added 2 hidden trim buttons so we could trim easier. There is no physical buttons but you can find them next to the Altitude/GPR table (see image). Just hover your controllers above them and they will show up.

C510 - Cessna Mustang - by RWDesign
This plane was on my list for a long time but after finishing the SR22 I decided to give it a try and make it VR friendlier than it was.

In the following modification I tried to focus on:Known issues:
Autopilot [nav] can act strangely and will force you to fix it manually before reusing it (this is RWDesign task to fix).

For any issues please notify me directly 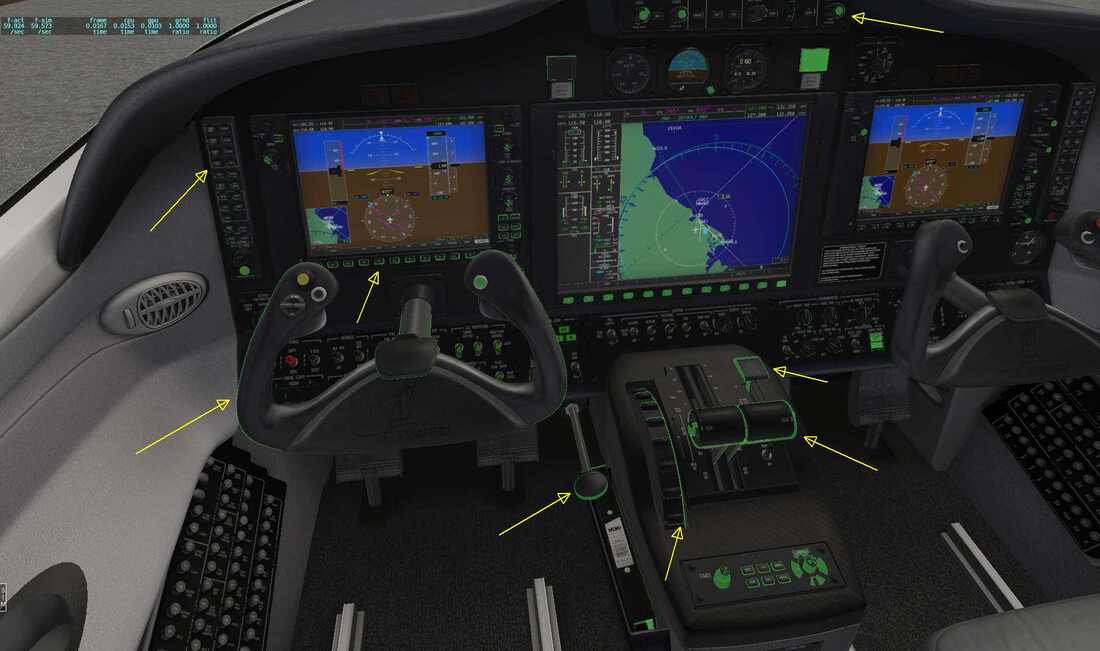